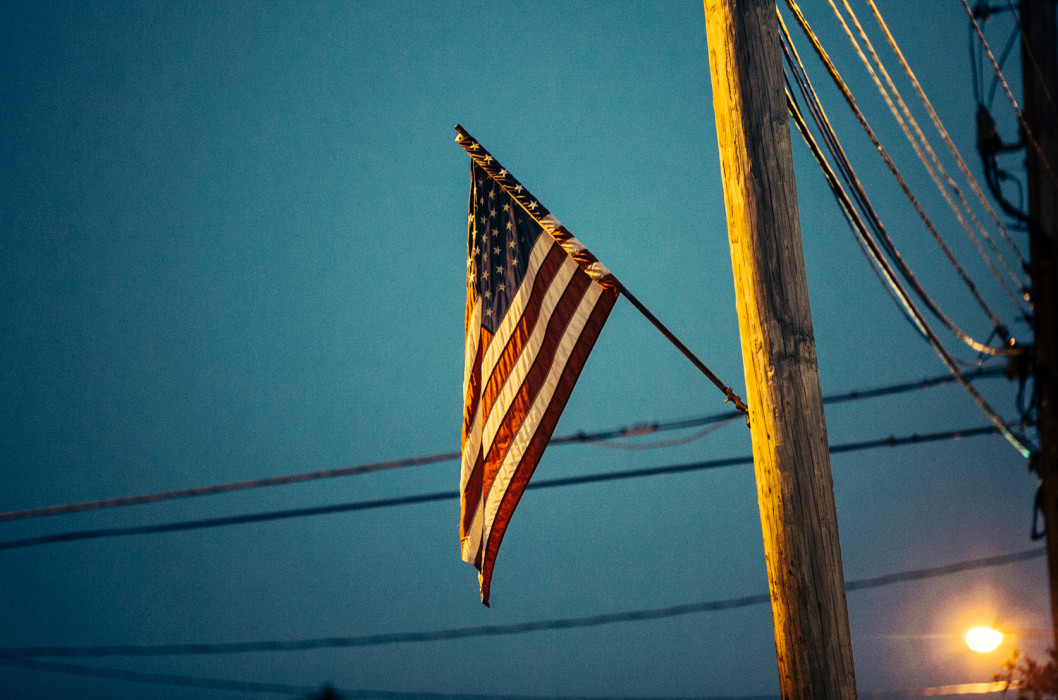 Each day, we use signs to make a claim about what we believe.  As a husband, the ring I placed on my wife’s finger is a sign to the watching world that I am hers and she is mine.  As a society, we use specially marked signs, nearest to buildings, as an explicit claim that we believe those with disabilities should have greatest ease of access.  As a Marine, I would render a salute to a senior officer as a claim of my subordination and a sign that I stood ready to execute his orders.  Signs say something about what we believe.

One sign, common throughout our land, is the Flag of the United States.  It features fifty white stars, over a field of blue, symbolizing the states in our union.  The thirteen alternating red and white horizontal bars symbolize the colonies that declared their independence from the Kingdom of Great Britain. These symbols characterize much of our history and what it means to be an American.  But make no mistake; the flag, in its totality, is a sign which claims the sovereignty of the United States of America.

As a rule, the US Flag takes a back seat to no other.  Title IV of the US Code brings clarity to the flag itself, regulating everything from manner of construction, to proper handling and appropriate display.  In a marching formation of troops, it is to be carried at the front right of the formation – the place of honor.  If posted alongside other colors, it will be in the center.  If hoisted to the top of a flag-pole, with multiple flags, it should be at the top.  Regarding the display of the flag on a speaker’s platform, the US Code states, “the flag of the United States of America should hold the position of superior prominence, and in advance of the audience, and in the position of honor at the clergyman’s or speaker’s right as he faces the audience.”[1]  In fact, there are only two situations in which another flag may be flown in a place of higher importance.[2]  The first is at the United Nations Headquarters, in New York, which provides for the display of the UN Flag in a place of prominence relative to its member nations.  The second is during a worship service conducted at sea by a Navy Chaplain.  In such cases, the church flag may be flown above the US Flag during the conduct of the service.

Here is the argument that I would like you to wrestle with in the context of your places of worship:  It is visually impossible to fly the US Flag correctly while still claiming that we are first Kingdom Citizens.  Since we are not at the UN, nor at sea in chaplain led services, there is no provision for the US Flag to take a position of lesser importance, to say, the Christian Flag.  Yet, week after week we continue to visually depict a hierarchy within our worship centers that places the US Flag above a flag representing our Christian identity.  I’m not championing the Christian flag as an emblem.  Rather, I’m addressing our infatuation with posting the national ensign in our places of worship.  Some may wish to respond by placing the Christian flag to the speaker’s right (the place of superior prominence).  Yet, this isn’t permitted in the US Code.  If you are the type of person who cares about flying the flags, then my hunch is that you are the type of person who cares about doing it right.  Still others may wish to respond by claiming this is merely an unimportant matter of protocol.  However, if we understand the church as an outpost in the larger world, or as Dr. Jonathan Leeman describes it “an embassy,”[3] then our local church is the sovereign territory of our Lord.  It would be scandalous to fly the flag of another country atop the White House.  So why would we allow another standard to fly at our Lord’s Embassy?

Removing the flag isn’t an issue for dogmatism or the breaking of fellowship.  I understand that the flag likely made its way into worship centers in response to anti-American sentiment in popular culture.  Yet, this post is written after a year in which I fear many Christians prioritized political discourse to the detriment of Kingdom witness.  The fundamental petition of this post is that we prioritize our claim of being Kingdom citizens first; to unify around the Gospel of Jesus Christ.  Let us verbally and visually declare that Jesus is Lord!

The root of the word patriot is the Greek patēr, or father.[4]  To be a patriot is to love, support, and defend the land of one’s father.  I do love and support our country, and actively defended it for ten years, so please don’t confuse this post or its writer as unpatriotic.  I have been blessed by the many freedoms being a citizen of this country has afforded.  And I love our flag.  I’ve saluted it a thousand times in uniform, and one day, it will drape my casket.   I pray earnestly that the Lord will bring revival to our country; for the glory of the Father more than the fatherland.  My patriotism belongs first to my King before my Country.

Tomorrow, as we recognize our military veterans, let us give thanks to God for their service and the freedoms they helped protect.  Take the time to tip your cap to the red-white-and-blue at the ballgame or on your front porch.  Thank a man or woman in uniform for their service.  Pray for a gold star parent who lost a child fighting for their country. But the task of healing the brokenness of our land can only be accomplished by introducing King Jesus to our land.  This remains the greatest need of the hour.  Perhaps as we seek to turn the page on 2016, and as a sign of our Kingdom Citizenship, it’s time to reconsider flying Old Glory within our churches.

Adam Mallette is a PhD student at Southwestern Baptist Theological Seminary and serves as the Director of Student Services.  He is a former active-duty Captain in the Marine Corps and combat veteran of Operations Iraqi and Enduring Freedom.

View all posts by Adam Mallette

One thought on “Retire the Colors”

This site uses Akismet to reduce spam. Learn how your comment data is processed.